Andy Brown heads to the grand reopening of The Golden Cabinet to watch Scorn and a host of other experimental acts. He shares his thoughts on Louder Than War.

In those heady pre-pandemic days, The Golden Cabinet was renowned for throwing nights of experimental and underground music in the otherwise quiet West Yorkshire market town of Shipley. The walls of Kirkgate Center once rocked vigorously with everything from punishing techno and left-wing hip-hop to improvisational noise and drone. Each night felt like a substantial event with loud, eerie, and highly memorable performances. Oddly enough, that was the only night I found myself dancing regularly. Tonight, the doors of the Cabinet Doré will finally open again. Scorn, the electronic solo project of ex-Napalm Death legend Mick Harris, will rattle our ribcages later, but there’s a whole cabinet full of musical curiosities to discover first. One thing is certain, earplugs are most certainly recommended. 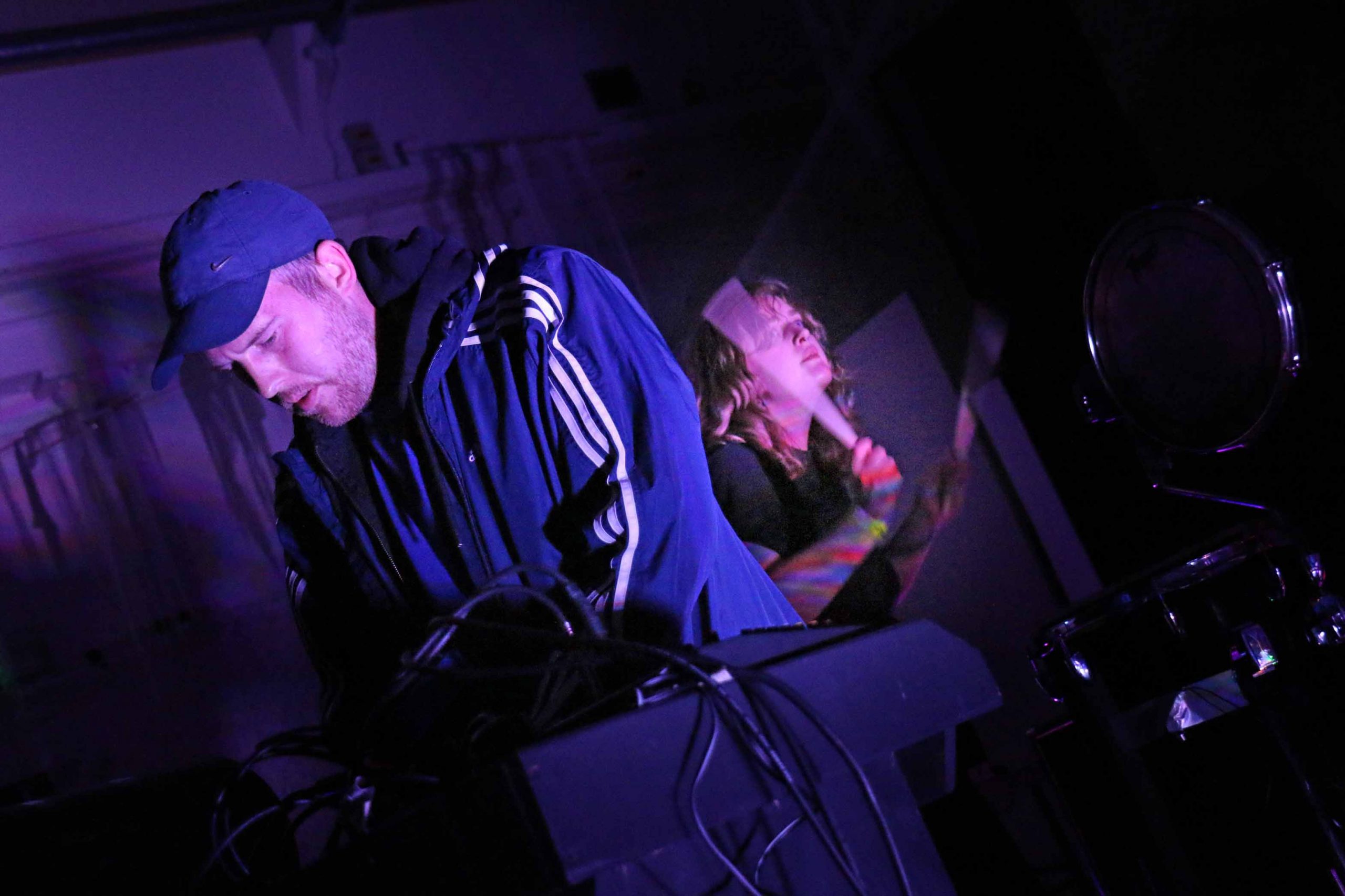 DJ Catalyst plays a mix of drones and full bangers to get us in the mood before Rochdale Prangers cutting the metaphorical ribbon. The Golden Cabinet is officially back in business. The trio plays very rhythmic industrial music built around imminent electronic drones, found sounds and primitive percussion. Picking up a drumstick, a member hits gas canisters for that extra punch. A rather gothic-looking big bell hangs from the drummer’s kit and adds to the metallic assault. There’s even what appears to be a small metal raffle drum. There are no guitars here or screams of anguish, just the perfect balance of noise and rhythm. The Prangers take industrial music back to its roots. Through their cathartic slamming, the group channels the innovative spirit of acts like Test Dept. Those poor old gas canisters get the beating of a lifetime, but everyone is having a blast. 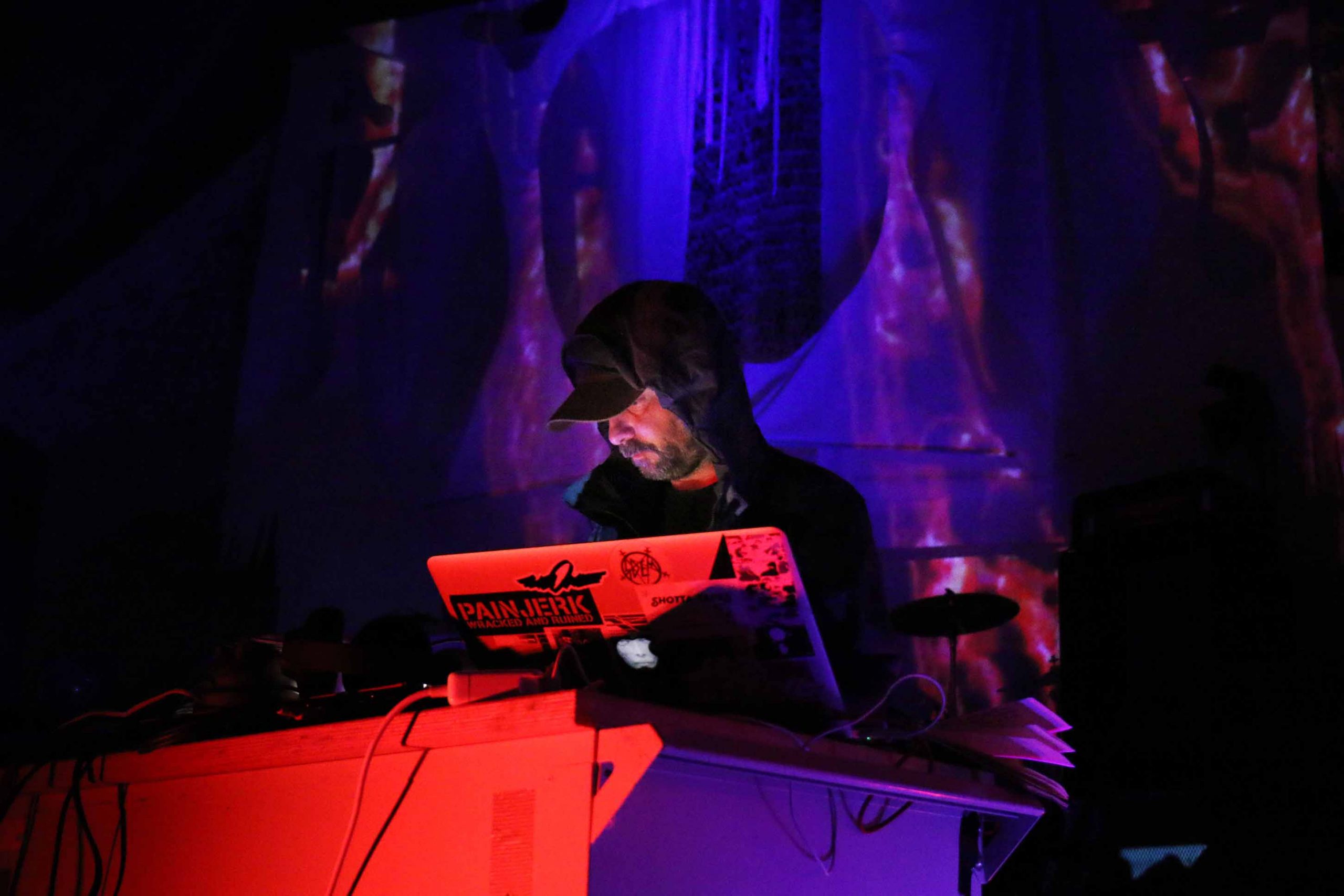 SDEM next is an electronic artist with a penchant for ground-shaking sounds. Hidden under his hood, this seasoned mix-maker is serious about delivering dark, rambling electronics and squelchy, bass-heavy beats. The music vibrates through the room and the whole thing feels like a full body massage. There’s a murky drone that underlies everything, constantly threatening to drag us into some sort of electronic underworld. It feels so good to be inside The Golden Cabinet again, with loud, experimental electronica channeled into my grateful holes. The last minutes are an exercise of breathtaking intensity. In a good way, of course. 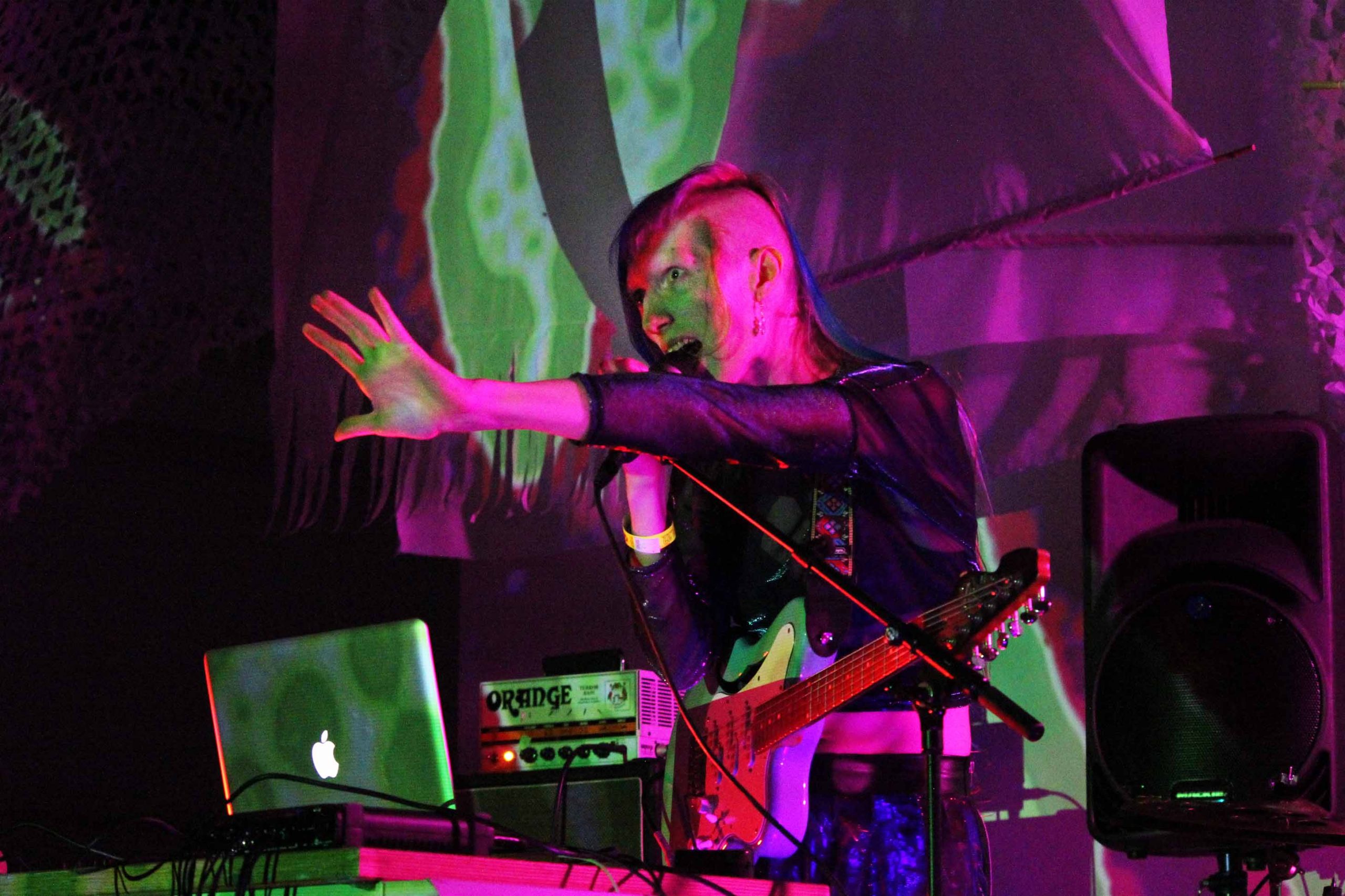 The ephemeral loop is the gender-blurred project of a Vymethoxy Redspiders aka Miss VR. Standing behind a table of electronic kit and brandishing a guitar, Miss VR immerses the whole room in her resolutely psychedelic universe. An intense yet beautiful dreamscape unfolds as spacey synths and hypnotic guitar engulf the room. Just when I think I know where it’s going, we’re greeted by a wall of blast beats and anguished screams. A buzz of excitement goes up my spine, this is going to be an interesting ride.

The entire set feels like one continuous piece that melts and transforms into something new when you least expect it. One minute we’re thrust into the heart of a sweaty 3 a.m. rave and the next we’re knocked down with a face-melting metal plate. All the while, Miss VR is completely lost in every twist. It’s hard to figure it all out, but I’m pretty sure I’ve never seen anything quite like The Ephemeron Loop. An extreme and intensely euphoric experience. 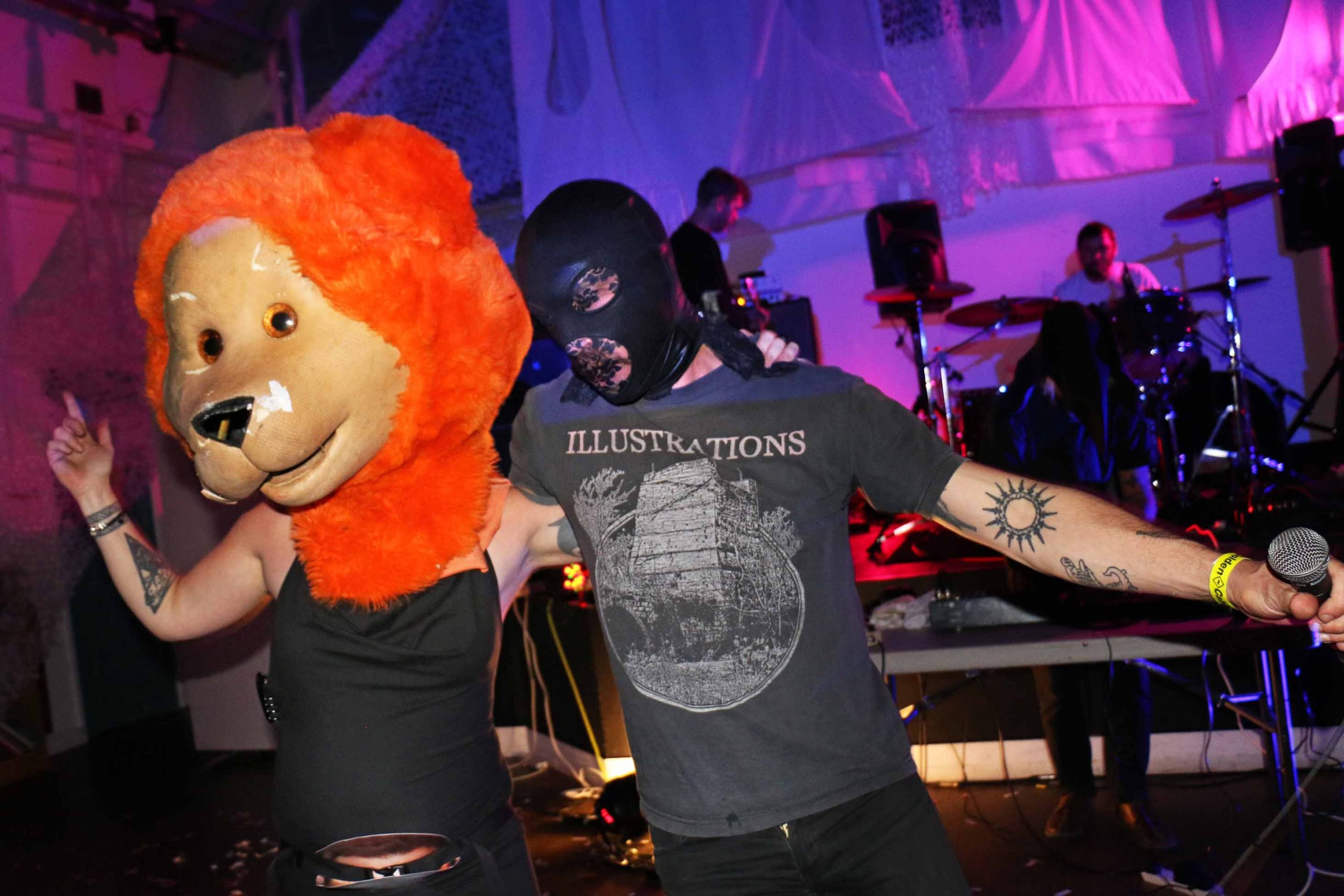 I hear what sounds like one of those tapes people listen to when they learn another language and I look around and see a man walking around with a big speaker strapped to his back. holy scum are there to play with our fragile minds: any band featuring members of Action Beat and Gnod is bound to do so. Suddenly, the hum of amplifiers is heard and the band comes to life. The sound is thick, heavy and crushing. An electronic drone resembling a mermaid vibrates through the crowd courtesy of Gnod’s Paddy Shine. Bass and drums pound our bodies as all sorts of chaos pours into the room.

Seconds later, I’m face to face with guitarist Peter J Taylor as he takes the first of many trips through the crowd. People wearing huge bear heads dance through the crowds as the band’s masked vocalist Al Wilson roams around like a caged animal. I don’t know where to look because the show is happening all around us. At one point, Taylor appears to abandon ship, only to return seconds later with champagne. Like some kind of rock ‘n’ roll revival, we are soon doused with the contents of the bottle. Spectators reunite with mic and guitar as the improvisational frenzy brings together new members.

Bassist Chris Haslam and drummer Jon Perry anchor the madness with a substantially meaty noise-rock accompaniment. A lot of bands save this kind of stuff for their last track. Holy Scum, on the other hand, fuels their entire set with an anarchic and unpredictable energy. At the end, the room is covered in confetti and champagne and the microphone hangs from a beam above our heads. They came, they saw, they kicked ass. Holy Moly, what a sight! 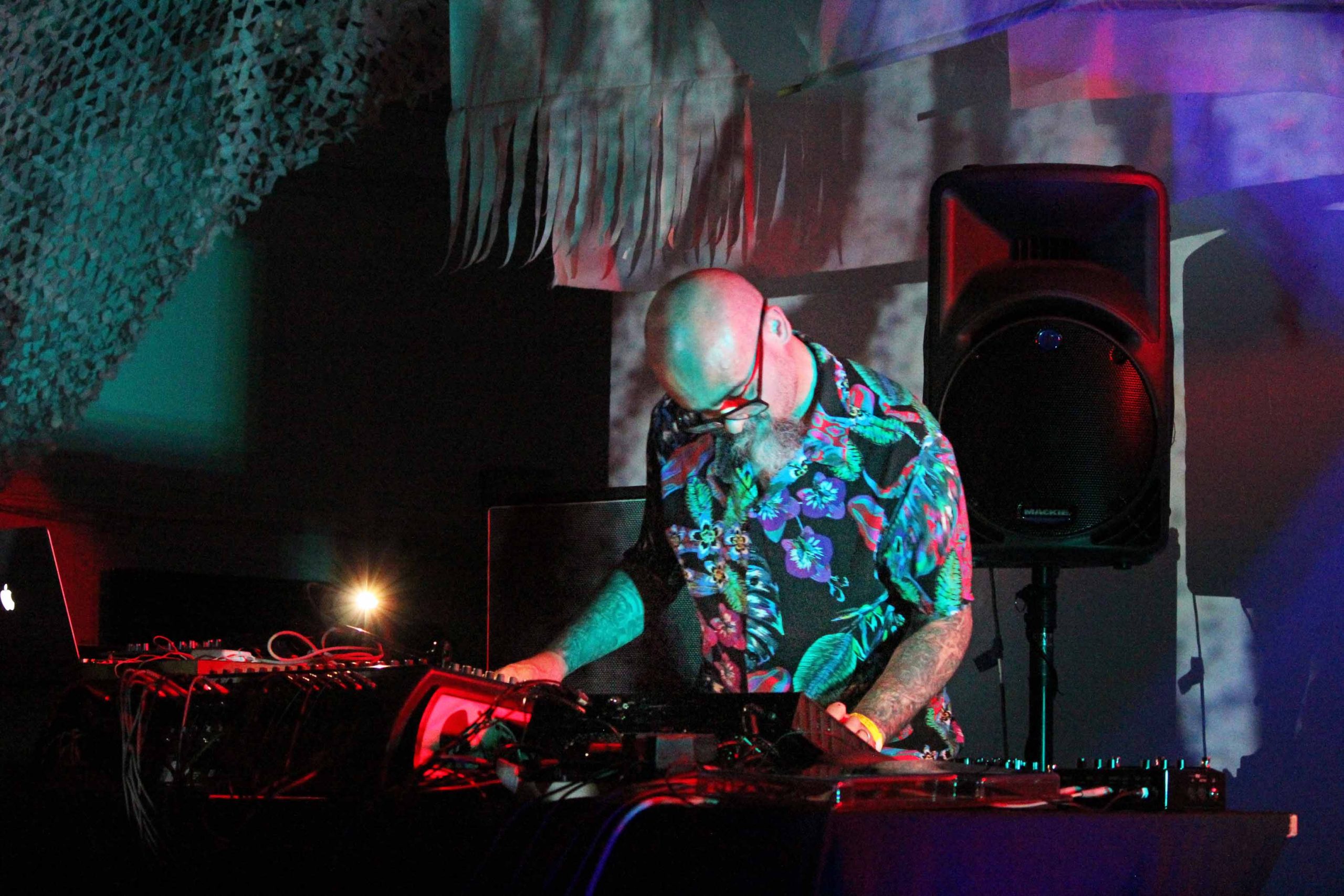 On a night of extremes, it seems only fitting that the first Golden Cabinet in years ends with a set by Mick Harris aka Contempt. Harris played drums for Birmingham grindcore kingpins Napalm Death before forming Scorn in the early 90s. With this new project, Harris would explore everything from Swans-style noise and industrial hip-hop to dub and to experimental electronics. Not to mention Harris’ penchant for ambient music and jazz-influenced metal. After 7 years away, Scorn returned in 2019 and has been happily shaking the foundations ever since. Simply put, Harris and The Golden Cabinet are made for each other.

Sipping a drink and dressed in a Hawaiian shirt, Harris couldn’t have looked more at home behind the massive pile of dials, wires and electronic equipment. It’s from this powerful motherboard that Scorn serves up a wall of drone and heavy, dub-influenced bass. Harris enthusiastically twists the controls and handles the inevitable onslaught, like Doctor Who guiding the TARDIS through a particularly heavy meteor shower. It’s clear from every expression that he’s a man who really loves what he does. Contempt is a force of nature that shakes hips and slams windows. When we get lost in the scenery, the current suddenly cuts off. Everything becomes black and white as the projections and the music disappear. A dejected Harris sits down as someone rushes to the fuse box. Surely it can’t end like this?

To the cheers of the crowd, the screenings come to life and Scorn is ready for round two. I dropped my solitary party popper in celebration (they were free to enter), as the industrial dubstep machine bursts from the grave. The effect is physical, like being beaten by a storm. Invigorating and overwhelming noise for your body and soul. As the grand reopenings progress, you really couldn’t ask for a better night. In the words of one particularly vocal fan, damn true!

All words by Andy Brown. You can visit his author profile and read more of his reviews for Louder Than War here.